7 of Europe’s Most Romantic Under-the-Radar Destinations

Swooning over romantic city breaks for Valentine's Day? Or perhaps you have a client who just wants to sweep their partner off their feet? Why go for the obvious, like Paris or Venice, when these seven lesser-known romantic destinations are just waiting to be discovered.

You can't buy happiness they say, but you can buy a holiday; and for most of us, that's close enough. So if your client really wants to make their loved one happy, a getaway to one of Europe's most romantic destinations is a good start.

Here's a round-up of the continent's lesser-known romantic hotspots and why travelers will fall head over heels for each one: 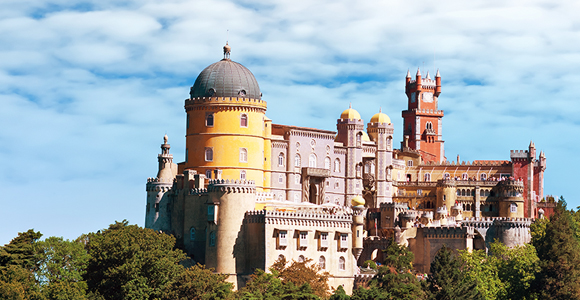 In the foothills of the Sintra Mountains, Sintra sits west of Portugal's capital city of Lisbon. From afar, the pastel hues of the Moorish and 19th-century architecture create a stunning contrast for the lush green forested terrain. Couples who visit are taken back by the storybook atmosphere that sweeps this town; stroll along winding walkways, gasp over glistening palaces and take in breath-taking scenery from mountain-top viewpoints. This town is just down the road from Lisbon so you can visit it in half a day if you're pushed for time. You can take an optional excursion to the city on Intrepid's Madrid to Marrakech adventure.

Get there: 45 minutes by train from Lisbon

2. Canal-side dining in Utrecht, the Netherlands 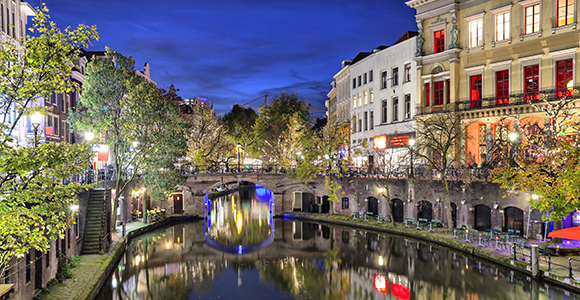 When we think of love, romance and canals, the obvious destination that springs to mind is Venice. Yet one of the Netherlands' most underrated cities is actually regarded (by many who have been) as the most beautiful canal city in Europe. Utrecht, which inevitably sits in the shadow of the Dutch capital of Amsterdam, has a unique split-level canal design with a number of cozy cafes and water-side restaurants lining the wharfs, making it perfect for couples who like to dine out or enjoy a morning coffee. Although it has the largest student population of any city in the Netherlands, Utrecht still retains its age-old medieval charm and is one of the most quintessentially Dutch cities in the country.

Get there: 30 minutes by train from Amsterdam 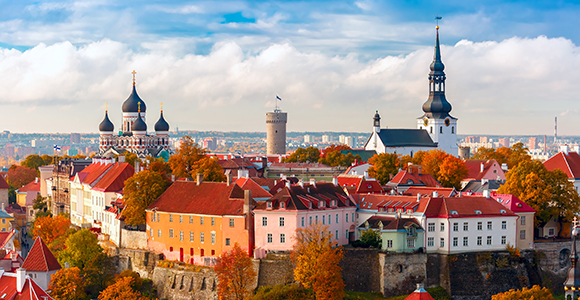 Perhaps one of Europe's least known capital cities, it's a mystery that Tallinn has remained somewhat under the radar. This Estonian gem borders the Baltic Sea and is home to a number of medieval and Gothic structures, a cobblestone old town and a selection of Aladdin-like palaces which help cement this city's fairytale feel. Valentine's Day may be one of the coldest times of year to visit, but couples still enjoy strolling along the narrow streets before stopping off at the various bars and attractions whatever the time of year. Wrap up warm and enjoy a scenic walk in the Pääsküla bog on the outskirts of town, or embrace the cuisine on an Estonian food tour. Visit the city on any of our adventures through Estonia.

Get there: 20 minutes by bus from Tallinn Airport

4. A Disney-castle setting in Segovia, Spain 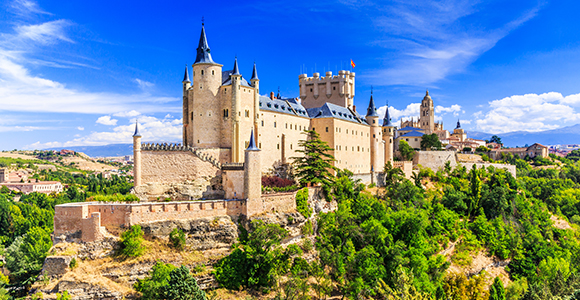 Located north-west of Madrid, Segovia is one of the most popular day-trips from the Spanish capital, although it's still relatively unknown by the majority of holidaymakers. Here you'll discover two UNESCO World Heritage Sites: the historic Roman Aqueduct, and the charming old town where cobbled walkways lead to artisan boutiques and pretty cafes. Segovia feels like a blast from the past and there's an aura of myth and legend about it too, particularly when you consider that The Alcazar – one of Europe's most captivating fairytale-esque castles – is said to have been the inspiration behind Walt Disney's Sleeping Beauty castle. While the views from its rocky-hilltop location are mesmerizing, seeing it from above on a romantic hot air balloon ride is even better. Spend time in Segovia on these Spanish adventures.

Get there:30 minutes by train from Madrid 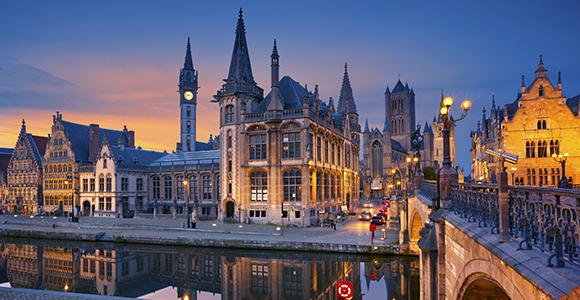 Medieval architecture, pretty canals and little cobblestone streets come to mind when you visit Ghent – a well-kept secret when you consider the popularity of its neighbors Brussels and Bruges. For years, these two cities have seen huge amounts of international visitors but Ghent still retains a less touristy appeal. You'll walk your socks off in this city, particularly when you explore the pedestrianized city center, which encapsulates a welcoming and cozy atmosphere. From the canal-side cafes that spill out onto the street to the quirky bars where you can enjoy Belgian beer or two, there's plenty to do here with your other half, making this city perfect for a romantic getaway. Take an optional journey to Ghent on these Belgian tours.

Get there: A train from Brussels takes just under an hour 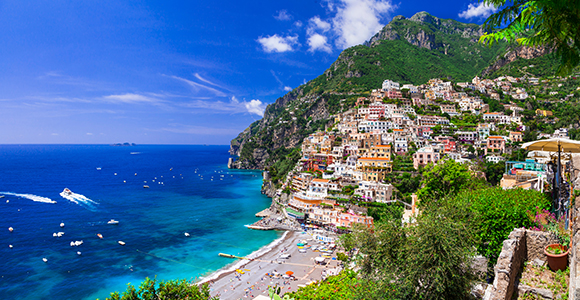 Just south of Naples, Positano has been hailed as the most enchanting place on Italy's Amalfi Coast. Many couples who travel to this country head straight for the usual haunts of Rome and Venice, yet Positano is a little less known. Sunny days are best spent here when clear skies allow you to see the landscape in all its glory: think colorful, hillside houses stacked alongside blue Mediterranean waters. Climbing up the many steps to the town's vantage point is no easy task, but the views from the top will make your heart sing. Better yet, cut out the hard work and take a bus up to the Hamlet of Nocelle, a beautiful village where you can hike along the 'path of the Gods'. Achieve ultimate Amalfi bliss on these Intrepid trips.

Get there:The drive from Naples takes just over an hour; or Sorrento is 35 minutes by car 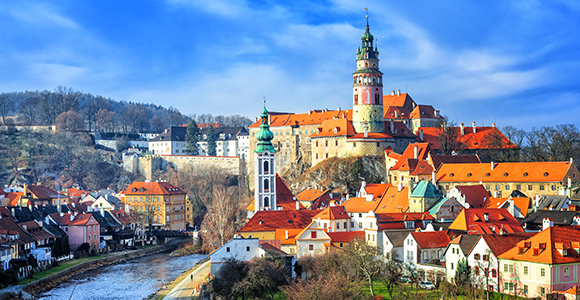 Prague tends to be the city of choice for most of us who visit the Czech Republic, but if you head far enough south from the capital, you'll reach a place many have never heard of, despite it being the second most visited city in the country. Cesky Krumlov is every bit as charming as Prague, but with fewer tourists. The winding Vltava River wraps around the city center, where a maze of cobbled lanes can be found among Gothic, Renaissance and Baroque-inspired buildings. Cafes, restaurants and markets are plentiful while some excellent attractions like the Cesky Krumlov Castle, and even Mount Klet on the city's outskirts, draw in day-trippers from Prague. All Intrepid trips in the Czech Republic visit Cesky Krumlov – start exploring now!

Get there: The drive from Prague takes just over 2 hours

Rainforests. Beaches. Ruins. Temples. Tea. Surf. Trains. So many reasons to visit the idyllic island nation of Sri Lanka. But why simply list the reasons when we could show you picture proof that this destination deserves a place at the very top of your bucket list? In this instance, ‘picture proof

If the term “national park” conjures up images of snow-capped peaks, crystal-clear lakes, secluded hikes and unlimited adventures, we’re happy to report that you’re spot on. Europe’s national parks are all that, and more. The continent’s protected wilderness is vast, it’s beautiful and it’s perfect

Do you love food so much that you would literally travel… for food? You’re not alone. There’s nothing we love more than eating our way through a destination. So much so that we have an epic range of Real Food Adventure trips all around the world. To celebrate them, we’ve collated a definitive list o

Why You Should Definitely Consider a Winter Adventure in China

Winter is not peak tourism season in China. Which is exactly why you should visit when the temperature drops. Picture this: instead of battling the throngs and the heat at the Great Wall, you can catch it dusted in snow, mixing with holidaying locals instead of Instagram-obsessed tourists. There are

I cant wait to visit.