Magic Amidst the Madness: A Vacation Fairy Tale

Once upon a time, a humble man looked forward to an upcoming milestone birthday. He had worked hard all of his life, and his wife of many years wanted very much to reward him with a celebration to remember. Unfortunately, it was the year of 2020. This particular year had not been kind, but instead conjured up dark evils which ridiculed everything the world knew as “normal” and instead cast chaos and the fear of a global pandemic in its wake. Many people chose the safety and security of staying close to home.

But, the feisty wife of this humble man decided it was time for an adventure. After all, the health of the body must also be balanced by the health of the soul. It was time to embark on a journey that some would deem foolish, frivolous, even deadly.

On September 3, the man and his wife arrived at a resort in Cancun that she had carefully selected. Before entering the property, they were presented with a CleanComplete Verification™ document detailing their 360-Degree Quality, Safety and Hygiene System. 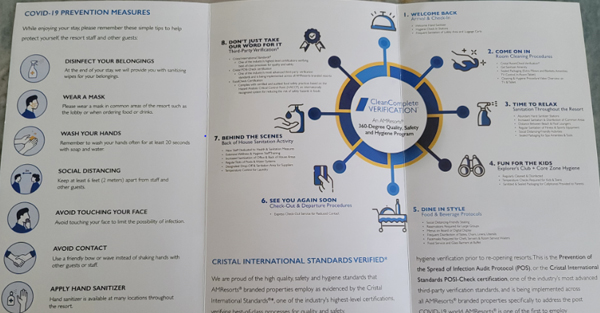 As they took their first steps into the lobby, they knew they had made the right decision to come. The smell of beautiful, tropical flowers gently welcomed and soothed them. They walked over dampened mats to cleanse the bottoms of their shoes. Their hands were cleansed with clear, fresh liquid, and they were presented with champagne to celebrate their arrival. Everything was right. 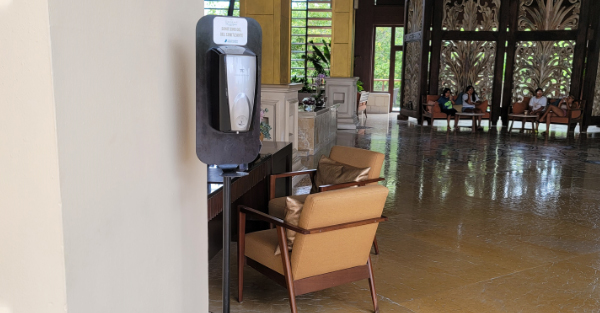 Even as surfaces appeared to be extraordinarily clean, glistening like fire in the sun, the staff continued wiping them, over and over again to ensure their precious guests were safe. In fact, they performed many never-ending rituals to ensure they were doing everything in their power to eliminate any threat that the virus could impose. Hand sanitizers were plentiful, and conveniently and strategically placed. 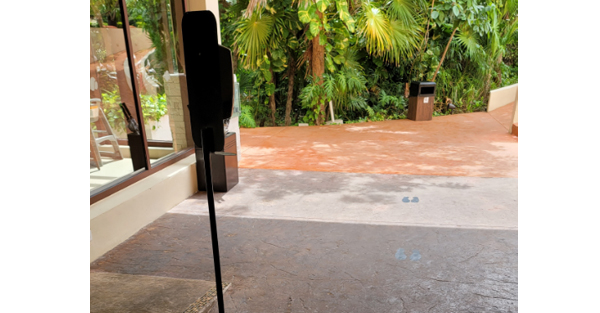 Within the pool area… 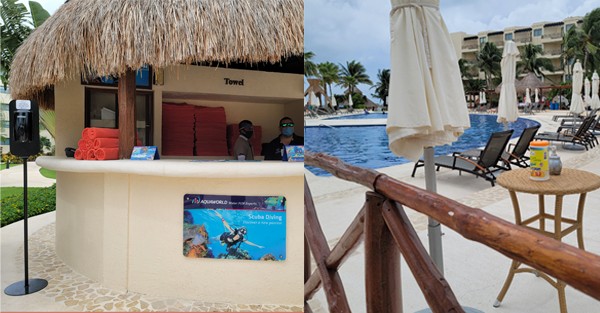 Food was carefully protected behind glass… 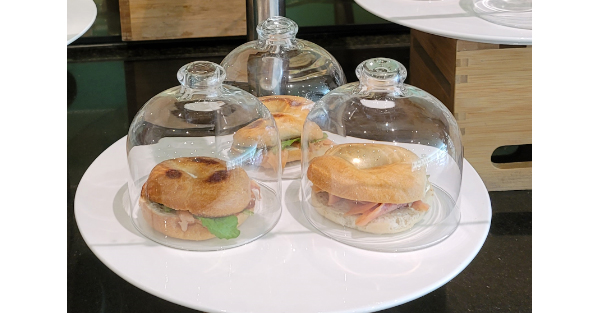 All staff wore face masks, both inside and out. Temperature checks were performed regularly before entering restaurants. 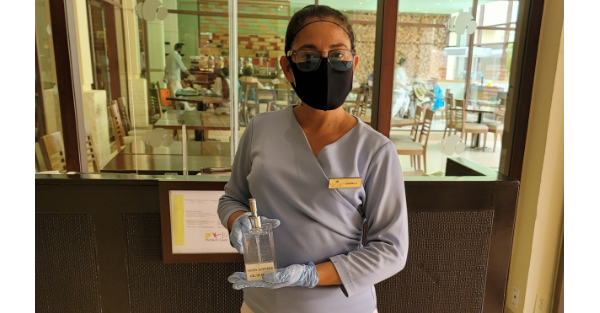 The safety of their guests was the highest concern.

Upon entering their room, the man and the woman were amazed at what they saw. It was magnificently appointed with a large vanity and double sinks. The large whirlpool tub and beautifully tiled shower were amazing, and the bed and linens were comfortable beyond compare. But, having the opportunity to experience their own private infinity plunge pool was an experience to cherish! During the day, when the warm sun enveloped this beautiful land, they relished in their private pool. When the sun began to retreat, making room for a tranquil evening, they enjoyed their private outside hot tub.

More importantly than what they saw, was what they felt – a very Zen-like atmosphere. Peace. Healing. All was in order. 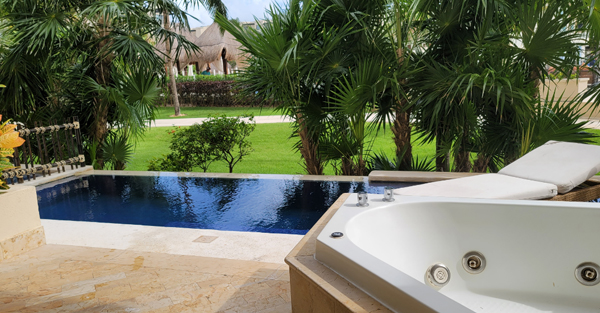 This paradise had welcomed guests from across the United States. California, Denver, the Midwest, New York, Pennsylvania… Two wedding celebrations were taking place as the man and the woman were enjoying their stay. Happiness and joy prevailed and the hunger for the way life “used to be” was the common yearning among all guests.

The restaurants, the food, the grounds, the rooms, everything was picture-perfect. It was everything imaginable, and more. Yet beyond this, the man and the woman noticed something very, very strange. There was an indescribable magic in the air. It was everywhere. It was in the breeze. It was a unique feeling. A powerful sentiment. This resort didn’t have employees taking care of guests. It had a family of like-minded, caring individuals coming together to take care of guests. The check-in team, chefs, waiters, entertainment, housekeeping, bartenders, groundskeepers… every one of them was glad the man and the woman had come. They were glad all of their guests had come. 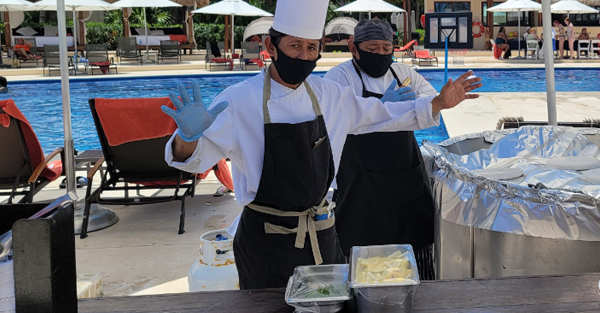 They stopped at nothing to make sure their every wish was fulfilled. They knew their guests’ names. They smiled. They cared. Really cared. When the man and the woman thanked them, their response was always – “it’s my pleasure.” When their favorite bartender Luis was asked how he made such an amazing drink, he simply said, “I add love and passion.” This truly was his magic, signature ingredient. Not only for drinks, but for life. 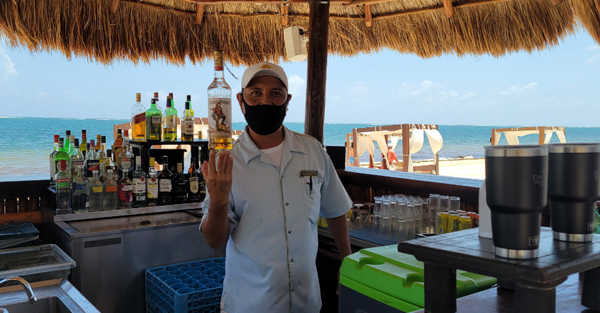 But to mention one, is almost to break the spell. For it is the sum of the whole that made the magic of this resort so incredibly special. They were a genuine family. Their goal was to do all they could do for their guests. Their hearts were overflowing, which in turn, meant everyone else’s were too.

So you see, embarking on a travel adventure that many thought was a foolish idea was, in fact, a very healing quest. The man and the woman restored the optimism that 2020 had stolen from them. The man celebrated his monumental birthday. They both discovered that there is still an abundance of magic in the world if you allow yourself the courage and freedom to chase it.

This is the stuff that dreams are made of. Thank you, Dreams Riviera Cancun – for a vacation to remember! 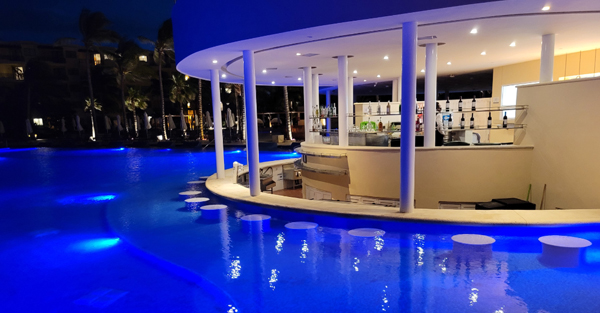 And the man and the woman plan to continue following their hearts, and vacationing happily ever after. 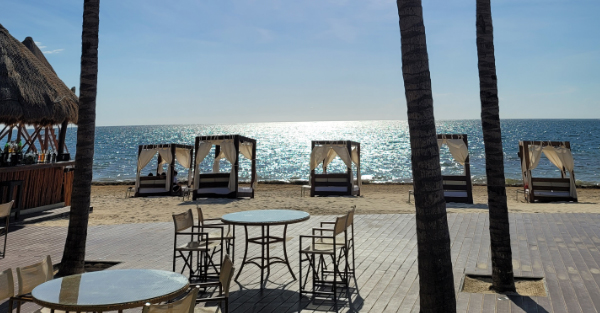 The Cancun International Airport reopened to international flights in early June, and now has recently shared a video outlining the new sanitary protocols the airport will be implementing going forward. Some of the protocols include: Enforcing social distancing throughout the airport, including on

Cancun is a favorite destination among travelers around the world. Whether a trip is booked as the result of a celebration, holiday or a break from the daily grind, Cancun is the perfect place to sit back, relax and create new memories. Cancun Basics Before diving into everything that’s great about

Stretching along Cancún’s lively resort strip, Melody Maker Cancún pairs the lifestyle and excitement of a beachfront hotel, world-class entertainment and fine dining with the amenities of a luxury resort, creating an unparalleled “Vegas-meets-Cancún” experience. Debuting in December 2018, Melody Ma

Hi @dominiquer, you can do that! Look in the upper right corner of the article and you'll find buttons that allow you to share it on Facebook, Pinterest and more with just one click.

Beautiful  resort...would love to vacation there!  Very well written article...thank you Sue for highlighting all the details of this resort and all those who work at the resort...impressive!  Very lucky husband to have such an amazing feisty wife who loves to travel and obviously loves him dearly.  Happy Birthday to her husband!